Russia & Ukraine In Bible Prophecy! Europe Must Prepare for War!

Russia & Ukraine In Bible Prophecy! Europe Must Prepare for War!

“And behold another beast, a second, like to a bear, and it raised up itself on one side, and it had three ribs in the mouth of it between the teeth of it: and they said thus unto it, Arise, devour much flesh.”  (Daniel 7:5)

Is (Daniel Chapter 7) being fulfilled?  In today’s lesson, we will take a look at the birth pains that will precede the coming of our LORD!. We are certainly living in perilous times. Jesus specifically spoke to His disciples about the end-times and even prepared them for what they would  face in their life-times. Certainly, as end-time believers, the Lord wants us to be prepared for what we must face in our life times. Maranatha!!!

As end-time believers, we are living in a very strategic hour.  If we ever needed God we need Him now.  This is not an hour for the Body of Messiah to become secular or lazy.  We are living in times in which we can not trust political narratives and media propaganda.  We must know the heart or the Lord in all matters.    This is the time for boldness and for demonstrations of power.

“And of the children of Issachar, which were men that had understanding of the times, to know what Israel ought to do…”

In the Bible, among the children of Israel, there were certain men from the tribe of Issachar who had an understanding of the times and the ability to interpret the Word of God in season.

“As Believers, God wants us to discern the times in which we live so we can prosper in every season and have wisdom to advance the kingdom of God.”

Wars and Rumors of Wars

“You will hear of wars and rumors of wars. See that you are not alarmed, for this must happen but it is not yet the end.”

Jesus warned His disciples that the end-times will be marked by continual conflict, turmoil, and wars. Statistics claim that since WWI there has been over 80 wars throughout the world. Yet, Jesus said that war in itself is not the sign of the end, because war will be continual until His return.”

“For nation will rise up against nation, and kingdom against kingdom. And there will be famines and earthquakes in various places. But all these things are only the beginning of birth pains.”

We cannot experience the “New Heaven and the New Earth” unless we experience a REGENERATION – a REBIRTH. I believe that the birth pains will birth the Messiah’s second coming! Messiah Jesus will establish His kingdom visibly here on earth. The King is coming!

Women who have experienced labor pains, know that before the birth, the birth pains intensify.  Jesus tells us that the world will experience the intensity of birth pains before the His glorious Kingdom is established on earth!

Today, we are going to take a detailed look at (Daniel Chapter 7)., where God gives Daniel a very detailed prophetic vision concerning the end-times.

Some Bible scholars interpret Bible prophecy from a preterist point of view; meaning that the prophetic events that take place in the Books of Daniel & Revelation were fulfilled at the destruction of Jerusalem in 70 AD.

The preterist outlook of Daniel Chapter 7 suggests that the visions of Daniel only serve today’s believers as a historical reminder of God’s sovereignty over the nations.   However, I believe that God’s sovereignty over the nations is still true today.  As end-time believers,  Daniel chapter 7, is just as relevant as it was in Daniel’s day.  God is still speaking to us through His word today (Hebrews 4:12).

I believe God’s word is alive and active.  In Daniel Chapter 7, Daniel’s vision of the Four Beast is just as relevant concerning God’s sovereignty over the nations in our times, as in Daniel’s time.”

In (Mathew Chapter 24), Jesus outlines the types of “birth pains” the world will experience at the end of the age.  These birth pains include mass-deception, offenses, famines, natural disasters, wars and rumors of wars. “

“Daniel spoke, saying, “I saw in my vision by night, and behold, the four winds of heaven were stirring up the Great Sea.  And four great beasts came up from the sea, each different from the other.  The first was like a lion, and had eagle’s wings. I watched till its wings were plucked off; and it was lifted up from the earth and made to stand on two feet like a man, and a man’s heart was given to it.” 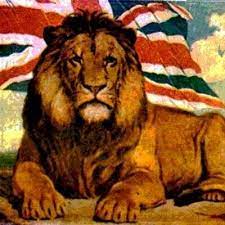 “And behold another beast, a second, like to a bear, and it raised up itself on one side, and it had three ribs in the mouth of it between the teeth of it: and they said thus unto it, Arise, devour much flesh.”

I believe that the bear represents Russia.  We all know that the Russian sumbol is the bear.  The 3 ribs could possibly be smaller states that have been consumed by Russia: Ukraine, Latvia, Estonia, or Belarus. After the Bear has acquired the 3 ribs, it will start to devour much flesh!  This could possibly mean an escalated war involving the nations of the world.  God has  told us in Daniel Chapter 7 that the outcome of this war will  be the rise of a Beast system, until the Ancient of Days establishes His kingdom upon the earth!

John Calvin wrote: “When God wants to judge a nation, He gives them wicked rulers.”  The Bible also says in Jeremiah 23:19; “See, the storm of the LORD will burst out in wrath, a whirlwind swirling down on the heads of the wicked.”

“For the leaders of this people cause them to err. And those who are led by them are destroyed.”

While the world is preoccupied with war, the devil is behind the scenes establishing his global agenda.  Did you know that recently the UN-WHO established a Pandemic Response Pact that will dissolve the constitutional sovereignty of nations. From the beginning Lucifer, has desired to set up his own kingdom.  This is why he was kicked out of heaven.  He is a counterfeit.  God tells us that for a short while the world will follow his global agenda.  Yet, just like at the tower of Babble, the Ancient of Days will destroy the enemy’s agenda for world dominance.

ALERT:  This war will spread throughout Europe.  Europe Must Prepare for War – Click Here!!

The matter between  Russia & Ukraine should be very concerning to Believers.  Incidents such as these are of Biblical proportion.  Are we heading for the 1st war of Gog & Magog found in Ezekiel 38 & 39?  For further research, please review Dr. David Regan’s review of The Wars of The End Time’s – CLICK HERE!

The 700 Club’s Pat Robertson recently came under fire for stating that  Russian leader Vladimir Putin was inspired by God to attack Ukraine.  Well, I must say that Mr. Robertson is not known for his political correctness, yet, is he entirely wrong?  If God knows the destiny of nations, Putin may be fulfilling what was foretold centuries ago.

“After this I beheld, and lo another, like a leopard, which had upon the back of it four wings of a fowl; the beast had also four heads; and dominion was given to it.” I believe that the Leopard which has four wings of a foul, and four heads represents a federation of nations.  These nations could include hostile countries like China, Iran, Venezuela, etc. etc…

Then you will come from your place out of the far north, you and many peoples with you, all of them riding on horses, a great company and a mighty army.”

The Fourth Beast:  The Beast System, The Anti-Christ, & The Ancient of Days:

Everything that God creates, Satan tries to counterfeit. God has a King named Jesus who rules the entire world. Satan attempts to raise up a counterfeit – a beast-king – who in every age tries to establish a global counterfeit kingdom – from the days of Nimrod until now.  However, God will prevail over the Beast and his system.  God’s kingdom shall be established on the earth!”

‘The fourth beast is a fourth kingdom that will appear on the earth, different from all the other kingdoms, and it will devour the whole earth, trample it down, and crush it (Daniel 7:23). “

In Daniel Chapter 7:7-14 This fourth beast could represent something like the EU or the UN.   This entity will be a conglomerate of nations that will give it’s sovereignty to the Beast system.  Ten kings shall arise from it. After that there will be a little horn coming up among them. The little horn is the Anti-Christ.”

“After this I saw in the night visions, and behold a fourth beast, dreadful and terrible, and strong exceedingly; and it had great iron teeth: it devoured and brake in pieces, and stamped the residue with the feet of it: and it was diverse from all the beasts that were before it; and it had ten horns.

I considered the horns, and, behold, there came up among them another little horn, before whom there were three of the first horns plucked up by the roots: and, behold, in this horn were eyes like the eyes of man, and a mouth speaking great things.

I beheld till the thrones were cast down, and the Ancient of days did sit, whose garment was white as snow, and the hair of his head like the pure wool: his throne was like the fiery flame, and his wheels as burning fire.

I beheld then because of the voice of the great words which the horn spake: I beheld even till the beast was slain, and his body destroyed, and given to the burning flame.

As concerning the rest of the beasts, they had their dominion taken away: yet their lives were prolonged for a season and time.

I saw in the night visions, and, behold, one like the Son of man came with the clouds of heaven, and came to the Ancient of days, and they brought him near before him.

And there was given him dominion, and glory, and a kingdom, that all people, nations, and languages, should serve him: his dominion is an everlasting dominion, which shall not pass away, and his kingdom that which shall not be destroyed.”

Beloveds, war brings perilous times.  Yet God Wins!  We must pray for peace.  Our hearts must be ready for the Lord’s coming!  God is giving us time to get ourselves together.  He is returning for a bride without spot or wrinkle.

If you have not repented of your sins and made Jesus your Lord and Savior, please do so NOW! If you do not have a personal love relationship with Jesus, please invite Jesus into your heart NOW! CLICK HERE!

← Lent 2022: Skin to Skin: Lingering In The Presence of God: A 40-Day Soaking Challenge w/ Tiphani Montgomery!
A Prophetic Word: The Refiner’s Fire! →