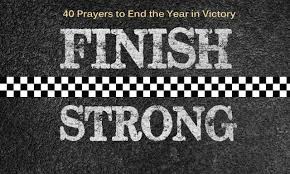 The journey of life is sometimes illustrated as a race.  In Messiah, a successful life’s journey is not determined by who will finish first – but who will finish well!  The enemy is fighting against our testimony as children of God to not finish well.  The stories of the patriarchs of the Bible serve as a lesson for us all.  Let us look at a few examples that will encourage us to finish well.

In 2 Kings 18:3-7, righteous King Hezekiah did that which was right in the sight of the Lord.  King Hezekiah outlawed idolatry, restored true worship in Judah, and led a national revival that turned Israel’s heart back to God.

Unfortunately, that is not the end of the story.  In all the great things that King Hezekiah did to restore Israel’s heart back to God, King Hezekiah made a costly mistake.

In 2 Chronicles 35:20-27, righteous King Josiah died in a battle that was not his to fight.   God used Pharoh Neco to deal with the Assyrians.  Pharoh Neco requested a peaceful passage through Judah to take the battle to the Assyrians, but, instead, King Josiah jumped into the fight and died on a battlefield that he should never have been on.

Concerning Josiah’s demise some translations uses the word “meddled” when it comes to Josiah’s intentions.  Josiah did not have God’s perception of the situation that he thrust himself into.   King Josiah’s demise teaches us that it is best to pray and receive God’s direction before we champion any cause.

Like a thunderbolt from the hand of God, Elijah walked in power, strength, and authority. Elijah confronted Ahab, called fire down from heaven, and slew three hundred prophets of Baal. Yet; when it came to Jezebel, Elijah feared for his life, and allowed one disgruntled woman to put him on the run.  Boy, did Elijah run! (1 Kings Chapter 19), tells us that Elijah ran 120 miles all the way to Beersheba. And notice what happened next. Finally, out of exhaustion, “[Elijah] went a day’s journey into the wilderness, and came and sat down under a juniper tree; and he requested for himself that he might die, and said, ‘It is enough; now, O Lord, take my life, for I am not better than my fathers.”

Often times, when we have experienced a great spiritual victory, we are prone to let down our guard; opening ourselves up for retaliation of the enemy. When we have won a victorious battle; we must put our shields up!”

Elijah, discouraged and fearful, threw in the towel and forfeited his ministry. Elijah even asked God to “take him out of the game.” Interesting enough, God obliged Elijah by commanding him to anoint a successor before taking Elijah to heaven in a chariot of fire.

“Sometimes, after we have faced tremendous spiritual battles, we become physically, emotionally, and mentally exhausted. It was only natural that Elijah would feel a deficiency as a result of exerting such great spiritual strength on Mount Camel (1 Kings Chapter 18). However, instead of praying for death, Elijah should have asked God to replenish his strength and spend time being restored in God’s presence.”

After being used greatly by God in military victory, Gideon led the people of Israel back into idolatry.

“Gideon made the gold into an ephod, which he placed in Ophrah, his town. All Israel prostituted themselves by worshiping it there, and it became a snare to Gideon and his family.”

Moses outburst of frustration had serious consequences. After forty years, of leading the children of Israel through the wilderness, entering the Promised Land was Moses’ dream.  However, due to Moses’ display of anger, pride, and rebellion at Meribah, God disqualified Moses and prohibited him from entering the land of promise, because God cannot build a nation out of rebellion.

Moses, Gods’ trusted servant, failed when he struck the rock (rather than speaking to the rock) at Meribah.   Yet, God in His mercy did not destroy Moses.  God was not finished with Moses.

Run To The Rock

In Luke 9:28-36, we see Moses again, on another mountain-top, the Mountain of Transfiguration where Moses (who represents the Law) and Yeshua (the fulfillment of the Law) came together.

The Bible says that Moses appeared in glorified form to speak to Yeshua concerning His departure, which Messiah would soon accomplish eight days later in Jerusalem.

The Bible is silent about the details of Moses’ conversation with Yeshua on Mt. Transfiguration. However, what we do see clearly is that Moses received a second chance to speak to the rock.  The ROCK of salvation – Yeshua Messiah!

“…and all drank the same spiritual drink—for they were drinking from a spiritual rock that followed them, and the Rock was Messiah.”

This time, as Moses stood before the ROCK, he was obedient and he spoke to the ROCK whatever Father God instructed him to say.”

Although Moses had failed in obedience at the rock at Meribah, Moses would experience redemption by the ROCK of Ages.  Moses did not get to see the Promised Land.  However, Moses did get to see the promised One.  Which is our ultimate goal as well.

Like Moses, our mistakes often keep us from experiencing God’s best.  However, when we blow it, God never leaves us at failure.  God’s ultimate goal is redemption.

When we experience God’s discipline and shaping, we must always remember that God is a good Father.  God loves teaching us how to walk with Him.  God is so confident in His ability to redeem us that even our mistakes often become the very tools that He will use to transform us.

Righteous King Jehu was used by God to destroy the dynasty of Jezebel/Ahab.  However, King Jehu took things too far and went on a massacre in Jezreel, for that God pronounced judgment on the house of Jehu.  King Jehu’s punishment reminds me that my zeal for the Lord must always be within His boundaries.

“…I will soon punish the house of Jehu for the massacre at Jezreel, and I will put an end to the kingdom of Israel.”

The Bible tells us that all inspiration was given for our example (2 Timothy 3:16-17).  Let us learn, from the mis-steps of these MIGHTY men.  Beloveds, God has a call for each of us.  We all have a task to perform, a kindness to show, a gift to give, love to share, loneliness to ease, pain to heal, and broken lives to help mend.  Let us walk closely to God and listen to His instructions so that we may FINISH WELL and FINISH STRONG!

As we reflect on these examples, let us watch closely for those pitfalls that the enemy places in our paths that hinder us from finishing well.

PRAY – Let us continue to pray without ceasing.

REST – God commands us to rest.  Live a life of consecration.  Rest with intention.

COMMAND PEACE – You cannot enter into rest without having peace.  During this time of prayer, command peace all around you.  Command peace within yourself.  Settle the issues of your heart in the presence of the Lord.   Let us lay down our worries before God in honor and adoration. Be at peace.  Let God arise and our enemies be scattered.

WORSHIP – Praise and worship invites God’s presence.  Stay in an atmosphere of worship.

Let’s go deeper in prayer. Through the power of intercession Yeshua equips us to ENTER and POSSESS the Land – and conquer the strongholds keeping us from FREEDOM and FULLNESS.  Please CLICK HERE for powerful prayers and resources.

Mornings With The Holy Spirit

If this ministry is a blessing to you, please partner with this effort in bringing encouragement and inspiration to the Body of Messiah.